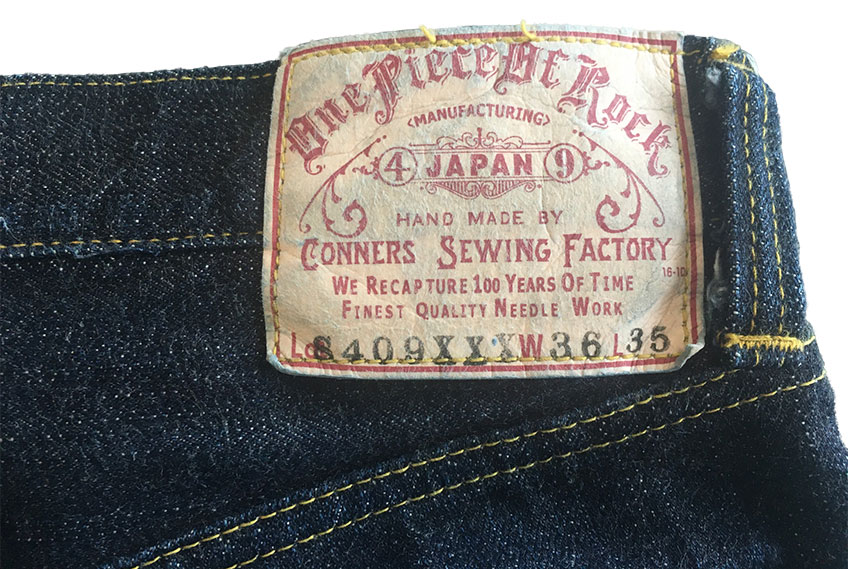 I like reproduction models, I think we’ve already established that right? Possibly making the most detailed repro jeans out there, Conners Sewing Factory S409XXX is something else. So when I got the chance to scoop up a lightly used pair from my friend Mr.T I pounced on it.

I’m not gonna dwell too much into the ethos of Conner’s Sewing Factory, Konaka-san and the S409XXX. Head on over to Denimbro and you’ll find pretty much all you need to know and a lot more. Definitely worth the internet trip!

Quite some time ago I also posted a video from Conner’s in which Konaka-san talks about his work. He really is meticulous about it.

Sorry about the crappy quality, but at least you get an idea of the cut!

Pretty long model number, eh? Well like you might have guessed, this is one of Conner Sewing Factory’s WW2-models, named Santa Cruz. I’ve failed to find why the models are named Santa Cruz, San José and San Francisco. But since Konaka-san is known for using a vintage pair to replicate, it wouldn’t be too farfetched to guess it is named after where the original Levi’s jeans were made. Perhaps you know? Leave a comment below.

Much of the hype of Conner’s originally stem from the fact that Konaka-san went so far to reproduce every aspect, even the wonky stitch work you find on some jeans from that era. The Santa Cruz however is one of the most neatly sewn models he makes, but of course there’s a reason for that too.

As they state on their website the original Santa Cruz-model was made for factory workers during the war. Because of the line of work it was necessary that the seams had extra strength to be up for the task, hence the shorter stitch count per inch.

But what about that paper patch?

If you know your little Levi’s denim history, the paper patch showed up during the 60’s. And this is a WW2-model, from the 40’s. Doesn’t make any sense?

Well, we also know that there was a shortage of material during the war. One of the most noticable details that shows this is the use of different pocketbag material you can find on vintage jeans from the WW2-era. Like the flannel fabric on this pair (sorry, no pics except on Instagram!), or the olive herringbone we used for my collab jeans.

The fabric used for the WW2-models weighs in on 13,5 oz. Pretty much the ideal thickness for me, not too hefty but still substantial. It has a soft feeling to it with some vertical falling, much like the vintage stuff.

Although it’s very nice I wouldn’t say that the fabric is what makes Conners Sewing Factory jeans shine. I’d put Ooe Yofukuten, Warehouse and TCB Jeans up on the same level if not even better with a few others too.

But the small details, that’s where it’s at! Like the wickedly shallow V-stitch, iron buttons, shape of the backpockets and ,like I’ve already mentioned, the patch and stitch work.

I see why there’s so much love for Konaka-sans work. It’s thrilling to support and buy jeans that you know is a one man-show, supernerdy with all the quirky details that we like. These will surely get the wear that they deserve now that the TCB 20’s contest is coming to an end.

If you do want to get yourself a pair of Conners Sewing Factory S409XXX, do mind that the measurements differ between the models and lots. People that have ordered multiple models have had to go for different sizes (without a procured beerbelly to blame on). Don’t wanna fuck up an order for jeans at 42 000 yen, haha. So be adviced.