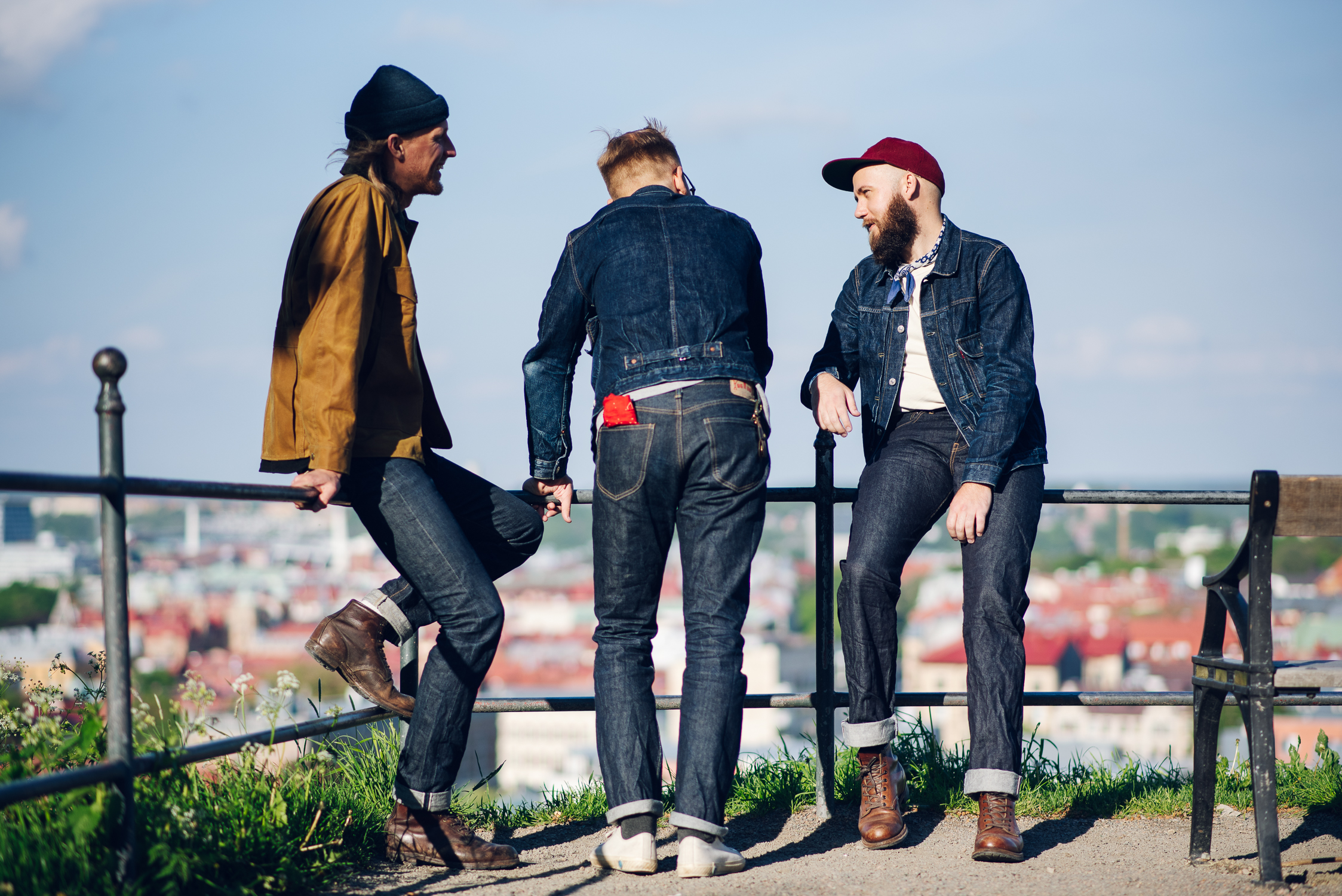 It all started in Tokyo

A trip to Tokyo in 2017 paved the way for the endeavour. During the trip I got to know Shingo Oosawa, founder of the small scale denim brand Denimbridge. A few months later we set the project into motion. The planning started for the new partnership with Göteborg Manufaktur, Indigo Veins and Shingo’s new brand Denim-Base. Denim-Base is a brand Shingo-san runs together with Kuniyoshi-san, mostly known for his own one man-brand Double Volante and sewing of Studio D’Artisan’s Champloo series, and Kana-san that runs denim brand El Canek.

The jeans are made by small family businesses all the way, from the dyeing factory in Hiroshima to Kuniyoshi-san that sew all the jeans himself on Okinawa, is also an important piece of the puzzle that connects Japanese heritage and craftsmanship.

A big source of inspiration for the GBG001 collab was jeans of the 60’s. The fit is smart with a mid high waist and enough room in the thighs. But still, it drapes down in a nice way giving the jeans a slim look.

All of us love vintage details but we never set out to make a 100 % reproduction. We’ve taken the details we love and thought could work well together in order to make a modern pair of jeans that still has the essence of times past. For instance, the jeans feature olive herringbone pocket fabrics, something you found during the 40’s. Lee’s backpockets from the 40’s was another inspiration. And the lack of hidden rivets and a paper patch stems from the 60’s.

The details of GBG001

There are many geeky details on this pair. For starters, Yamaashi mill in Okayama weaves the 14 oz fabric on a Toyoda shuttle loom. It’s a unsanforized (loomstate) fabric that Shingo developed exclusively for his brand. He strived to get as close as possible to the vintage vibes of old Cone denim and I think he got close. The fabric is a tightly woven twill made of blended American cotton. It gives the vertical falling you see on for example vintage Levi’s. At first it looks even but once washed the fabric crocks and you get more texture from the warp threads that pops.

The very light pink selvedge-ID is another geeky detail. The ID is not located in the same place on both ends. On one end it is in the center and on the other one it is dead close to the indigo threads. You can in rare cases find it on vintage jeans.

Wo chose an olive herringbone fabric for the pocketbags. It is my favorite of the different materials that were used during the 1940’s, when companies had to use whatever was at hand.

They will also rock specially made Denim Base top buttons made of iron and copper rivets.

One of my favorite tiny details is the coinpocket. Instead of the usual shape we went with a small spade pocket, like the backpockets. Something no one will notice except the wearer himself.

The GBG001 collab jeans feature a specially designed paper patch with the harbor cranes from Gothenburg. The design choice has a deeper meaning with Gothenburg having Swedens largest harbor, connecting us with the rest of the world. Much like a bridge and what Shingo-san wants to accomplish with his brand Denimbridge.

All the way back to the early 18th century trade ships travelled the globe to Asia before returning to the harbor of Gothenburg. For Japan, the trading between the countries began in 1886. So for us it makes sense with Gothenburgs historical connections to Japan and our harbor.

If you want a pair for yourself, the pre-order is up via Göteborg Manufaktur. Hopefully you’ll like them as much as we do, because I can’t think of anything I would like to do differently!