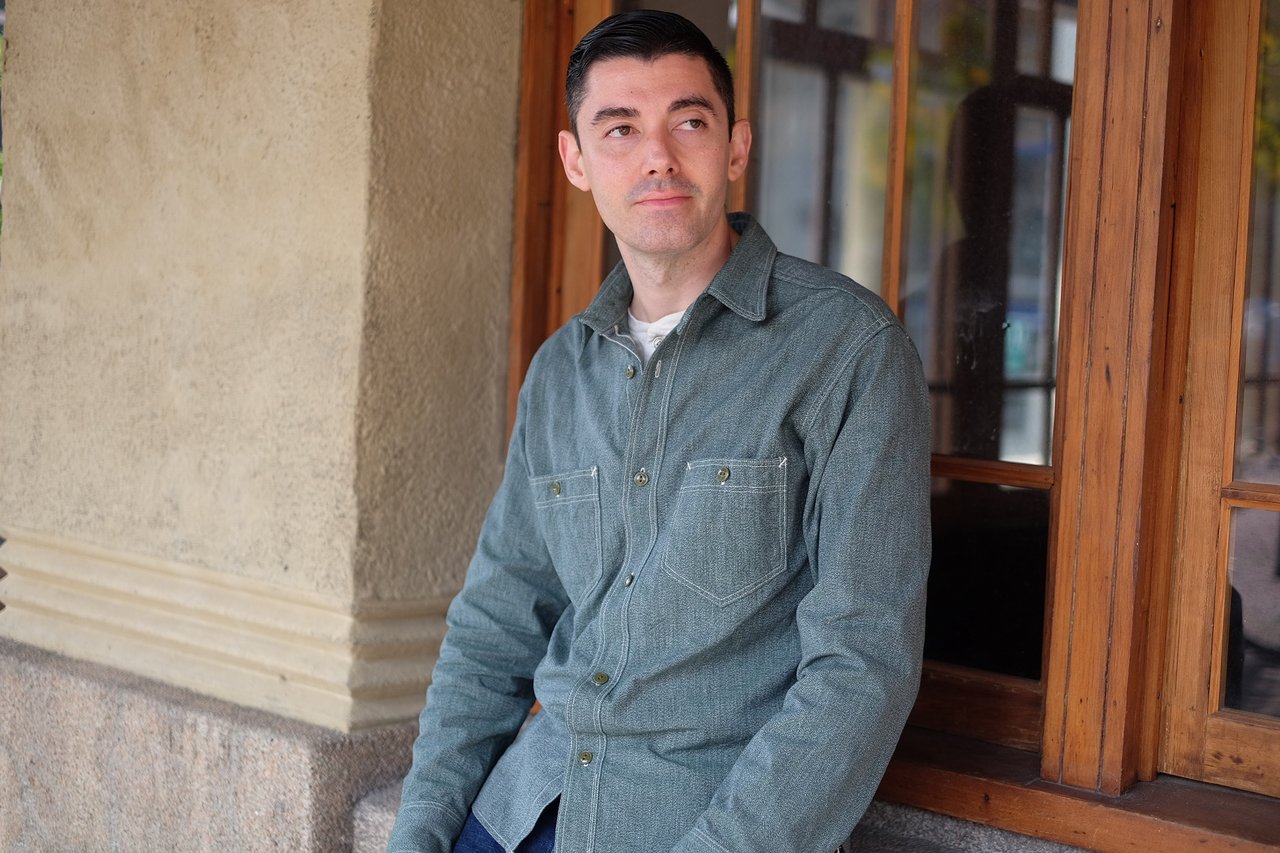 The Rite Stuff, the brand run by Bryan Shettig, has turned quite a few heads since he released the Heracles shirt in 2017. I felt an urge to dig a little deeper and had a chat with Bryan about the 1930’s, running your own show and what sets The Rite Stuff apart.

Before we dive into The Rite Stuff, who’s the man behind the brand?

Bryan was born in 1984 in Scotland to an American dad and Mexican mother. Thanks to his father’s work, he’s moved around a lot. Egypt. Singapore. Venezuela. Different parts of the US. Studying journalism in Texas. And now, living in Taiwan.

Asian art and pop culture has always had a good pull on Bryan since childhood. Lots of rosewood furniture, wooden screens, and other antique Chinese furniture was in his house from the time his family lived in Singapore. Teenage Mutant Ninja Turtles, Bruce Lee and Jackie Chan flicks.

The clothing interest didn’t really show up until later. Being 12 and a metalhead was the first spark. But then it was in that particular world with its own uniform and clothing style. Coveting Vans checkered slip-ons, and snap bracelets was a part of the game.

A job assignment for a magazine in 2013 was the selvedge spark. A somewhat unusual one. The assignment was an article about the blog Menswear Dog. Back then the owner included a line in his bio that said something like, “and never washing my selvage denim”.

A quick Google session and Bryan was hooked. Not just the look of it compared to an overlock stitch, but alos the entire mythos and history behind it.

“In high school my major was history, so I’d always been interested in things from the past, especially things that were once better or more interestingly made.”

A pair of Pherrow’s 441 jeans and one of their polka dot short-sleeve work shirts was the start. Although the Medium shirt was too small and the Large was too big, so they both had to be sold.

Pretty fitting for a man four years later starting a brand to set that problem right.

The Rite Stuff takes a lot of inspiration from 1910-1930’s. These were the decades where we could see many innovative ways taking form. Something that came to shape much of the workwear clothing that followed.

Chinstraps (of various lengths and widths), triple-stitching, cigarette pockets, pencil pockets, gussets, interesting back yokes, pullovers, sleeve facing styles, buttons and tags are just a few of the details that have piqued Bryan’s interest. Details that you’ll find in The Rite Stuff line.

Everything The Rite Stuff makes is influenced by these three decades in one way, shape or form. Both The Atlas and Heracles shirts are meant to fit into the 1930’s, but with a difference to it – the fabrics are better modern ones and the quality control is more rigorous.

For Bryan it’s not about making modernized versions of classic workwear per se, nor introduce intentional flaws into pieces to recreate an era. Details are included in his products, but not just for the sake of including lots of details. The fine line to walk is to capture that aesthetic without feeling too costumey.

Reliance Manufacturing Co. of Chicago, Illinois has a special place in the heart of Bryan.

They made some of his favorite shirts and have been a big inspiration:

“Overall they made more hits than misses in their design department. Many of their designs continue to be copied by workwear brands to this day, such as the Milton F. Goodman’s triple-stitched scalloped yoke and vent holes design, the Big Yank Flyer and its cigarette pockets, both the 1930 version and the ’40s version with the “gachapoke” pocket.”

The Rite Stuff, taking off

Like with so many great ideas, The Rite Stuff was born from seeing a gap in the market. There were of course great shirts being made on the Japanese denim scene, but they were made for a different body type than the western one. Sometimes too short sleeves, other times too narrow shoulder width.

Cold Summer/Kyle over on Superfuture posted the idea that someone should make custom, made-to-order workwear shirts out of Japanese fabrics but for Western guys. I liked the idea a lot and did a lot of mulling about it.

Liking the idea is one thing. Bringing it to fruition is another thing entirely. One of the first questions Bryan faced was whether to do it as a one-man operation or have them made with the help of someone else. It was a possibility, but in the end the one-man routine was thrown in the bin for a number of reasons.

Bryan’s short list of why not to do it yourself

There’s also the intricate problem of what the customers expect of a one-man brand. We all love it. The story of how our favorite gear is made by one man alone. It’s very difficult to keep that allure while bringing someone else on for the show and handle production. Something that’s pretty much a necessity if you want to make an entire line of shirts, tees, pants, jackets and even footwear like Bryan aspires to do.

“We’ve seen various one-man brands now in the denim, leather jacket and other worlds recently just sort of unravel or their wait lists get crazy long and I just didn’t want to end up letting people down in the end.”

Instead of burning out in all his glory, Bryan decided to have his product made for him elsewhere. But where? The US or Japan? Japan was the choice in the end. You can read more of why on Bryan’s blog. It wasn’t that easy though. Even getting replies from the companies was difficult.

Generally in those cases one needs to be introduced by a third party, such as a kind of agent, who vouches for you. Plus, fluent Japanese is usually a given in these cases.

The Japanese take their reputation very seriously and might not want to make products for just any guy off the street who turns out not to be trustworthy.

For The Rite Stuff, John Lofgren was the game changer in that regard. Previously John had done collaborations with Bandanna Almanac, ELMC and Papa Nui. A message to John, a positive reply and a flight to John’s headquarter in Sendai, Japan later and the ball had started to roll.

“When I visit them in Sendai, we’ll spend hours and hours talking about clothing and going over fabrics, buttons, and ideas for what to do next.”

John and his team are full of experience and advice. Although the decision ultimately rests with Bryan, having John and his team around and helping by bringing up new ideas plays a big role for The Rite Stuff, according to Bryan. In a sense almost like a collaboration at times.

With John and his team entering the scene Bryan never had to learn pattern making and all the other steps of the craft. Having access to masters of the craft has its perks. Draw the design and let them do their thing!

“I simply draw my designs and then our master pattern makers in Japan turn those into a pattern to make into a sample.”

Fast forward two years and The Rite Stuff has grown its line of business since the Heracles shirt first entered the race. The Atlas shirt, pocket tees, the Harvester henley, an undershirt, scarfs and a bandana have joined the fray.

Stockists carry the word of The Rite Stuff in ten countries across four continents. Surely that’s only the first yards of the start.

Classic, ethically made, fairly priced. The goal of The Rite Stuff is to make the best workwear repro-style clothes in the world right now. That comes from experience with vintage, and seeing what others have done right and wrong, what was done to chase a trend and what was done to make something classic, and discerning what’s better now than in the past.

That of course doesn’t mean everything is smooth sailing. Just because the aim is high or something sold well once doesn’t mean you have the luck of the Irish.

“The big challenge now is trying to read the market and price things correctly. I see brands selling competing products for a fair bit less, and in some cases much more, and it makes me think: am I pricing this correctly?”

Bryan is a fairly quiet guy for the most part. Always one to just sit back and observe the world and people around instead of being the center of attention. Observation, taking it in and thinking it through. Something that’s pretty apparent when you hear about how he takes care of his customers.

Listening closely to the customers have become an integral part in how Bryan handles his Rite Stuff. Chatting with people, getting their feedback and taking it into account. To me that is a very sound way of doing business that will help it grow stronger over time.

While running The Rite Stuff, Bryan still keeps on trucking his daytime job. It’s not an easy task getting everything booming, especially in the saturated workwear-fashion market we see today.

It’s not to the point where the daytime job and The Rite Stuff interfere with each other yet. Photos can be taken on the weekends. Posting on Instagram done on the commute or later at night.

“I figured when I started I wouldn’t be a hit out of the gate (I was right) so The Rite Stuff wasn’t going to pay the bills alone. It still doesn’t, actually, but every day it grows a little more and with enough support I think I’ll get there.“

Albeit having your own brand doesn’t take a lot of time most days, says Bryan. Samples takes months to be made, photoshoots a day or two, opening up for pre-orders and again waiting for several months for the product to arrive.

Getting help along the way is of course important in other areas than the help of John Lofgren and his team. The small loan Bryan got from his dad to kick it all off, a wife that supports and helps with inventory, bookkeeping and shipping. And of course everyone from customers to stockists who’s believed in The Rite Stuff products.

If it weren’t for them we might not get to see the Heracles shirt 2.0 in new colours or the selvedge denim chinos Bryan is thinking about.

“To those reading, I hope The Rite Stuff interests you, and if not, send me a message and let me know what you think!”

Make sure to check out The Rite Stuff. You can find his work on his website https://the-rite-stuff.com and Instagram. I know for sure that I will!